Exciting news for OS/2 fans: PCjs (v1.16.1) is now able to run OS/2 1.0 on IBM PC AT Machine Configurations. This is the culmination of recent work in PCjs to fully emulate the Intel 80286 processor and 16-bit protected-mode, including undocumented features like LOADALL and triple-fault resets. 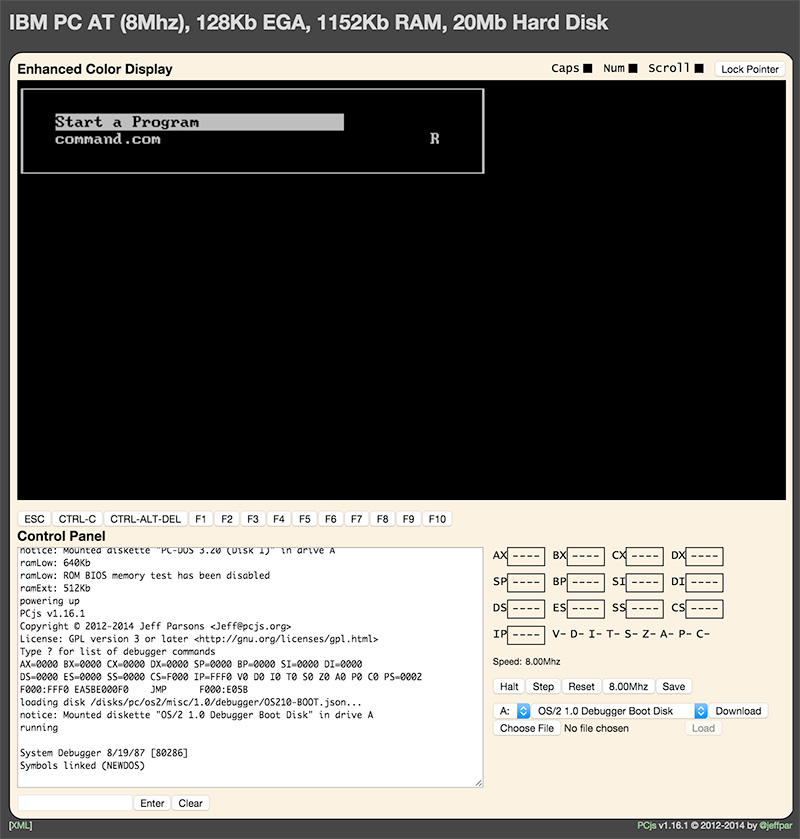 As an added bonus, the Model 5170 machines feature two serial ports, with COM1 connected to a simulated serial mouse and COM2 connected to the PCjs Debugger output window.

SIDEBAR: You can perform similar tricks with DOS in these machines. Boot any DOS disk (version 2.00 and up) and type “CTTY COM2” at the DOS prompt. All DOS input/output will now be routed to the Debugger display. To restore control to the the machine’s keyboard and video display, type “CTTY CON”.

When a fault occurs, OS/2 normally displays a “TRAP” message; however, when the Kernel Debugger is running, it intercepts the fault and displays the faulting instruction. But the PCjs Debugger has ultimate control: using the “m fault on” and “m halt on” commands, the PCjs Debugger will display and halt on any fault first. If you want PCjs to deliver the fault to OS/2, single-step over the faulting instruction and then continue.

There are still a number of known issues running OS/2. For example, when attempting to install OS/2 1.0 from the installation diskette images onto a hard disk image, OS/2 successfully formats the hard disk and copies the files from the first two diskettes, but usually while copying files from either the second or third diskette, the process stops. There’s no crash – it simply stops copying files and never finishes. My best guess at this point is that some interrupts are being dropped.

Similarly, if a machine running OS/2 1.0 is left unattended for a few minutes, it may stop responding. Again, there’s no crash or other indication of a problem. The machine simply appears hung. “Ctrl-Alt-Del” and “Reset” buttons still work.