Yesterday, I fired up Windows 3.1 and played a complete game of Windows Solitaire on my iPad. It was a bit, um, touchy, but it worked. 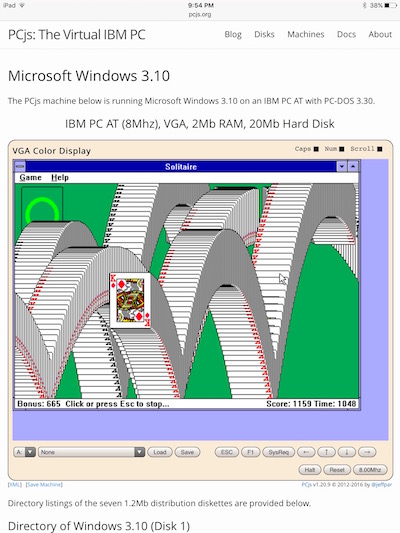 The basic touch events are:

which roughly correspond to mousedown, mousemove, and mouseup events, except that your finger isn’t exactly like a mouse – it doesn’t have buttons for one thing – so there are several usability problems that must be solved.

One of the problems is how to deal with the default behaviors of touch events. For example, tapping on a PCjs screen is normally how you trigger the iPad’s soft keyboard, and dragging your finger across the screen normally scrolls the page up and down. However, you don’t want either of those behaviors when you’re trying to move the machine’s mouse pointer around or click on things.

PCjs attempts to resolve the tapping problem by disabling default behaviors most of the time, except when two taps occur more than 1/2 second apart. This allows a quick double-tap to be treated as a double-click, while a pair of slower taps allows the soft keyboard to activate.

Another problem is how to differentiate between moving the mouse (ie, without any buttons pressed) and dragging the mouse (ie, with the left button pressed). Newer devices offer the option of relying on “3D Touch” (aka Force Touch), and using pressure to determine the user’s intent, but most devices don’t have that feature, and I’m not sure I’d want to rely on that anyway.

The PCjs solution: if you tap and hold for more than 200ms, and then start moving, your movements become the equivalent of a mouse drag operation.

This is my first stab at touch-to-mouse conversion, and it’s not perfect, but it’s already fairly usable, as my Solitaire experiment demonstrates. And there are still some open questions, such as how to intuitively support operations like right drag, since the current mouse drag operation is inherently left drag; one solution would be to rely on multi-touch and use two fingers to trigger right-button operations.