I recently did some more work on the PCjs VT100 Terminal emulation, making it work a bit better with other PCjs machines – specifically, PDP-11 and IBM PC machines.

As I explained back in August 2016, the PCjs VT100 emulation isn’t just another VT100 emulator, but a simulation of the original VT100 terminal. One of the goals is to provide users with a more authentic retro-computing experience, by combining classic computers with display terminals from the same time period.

One of the latest improvements was a simple layout change, so that if you stretch your browser window wide enough, you can have your PDP-11 Front Panel and VT100 Terminal side-by-side. It’s like having Certs with Retsyn: TWO PCjs machines on ONE screen! 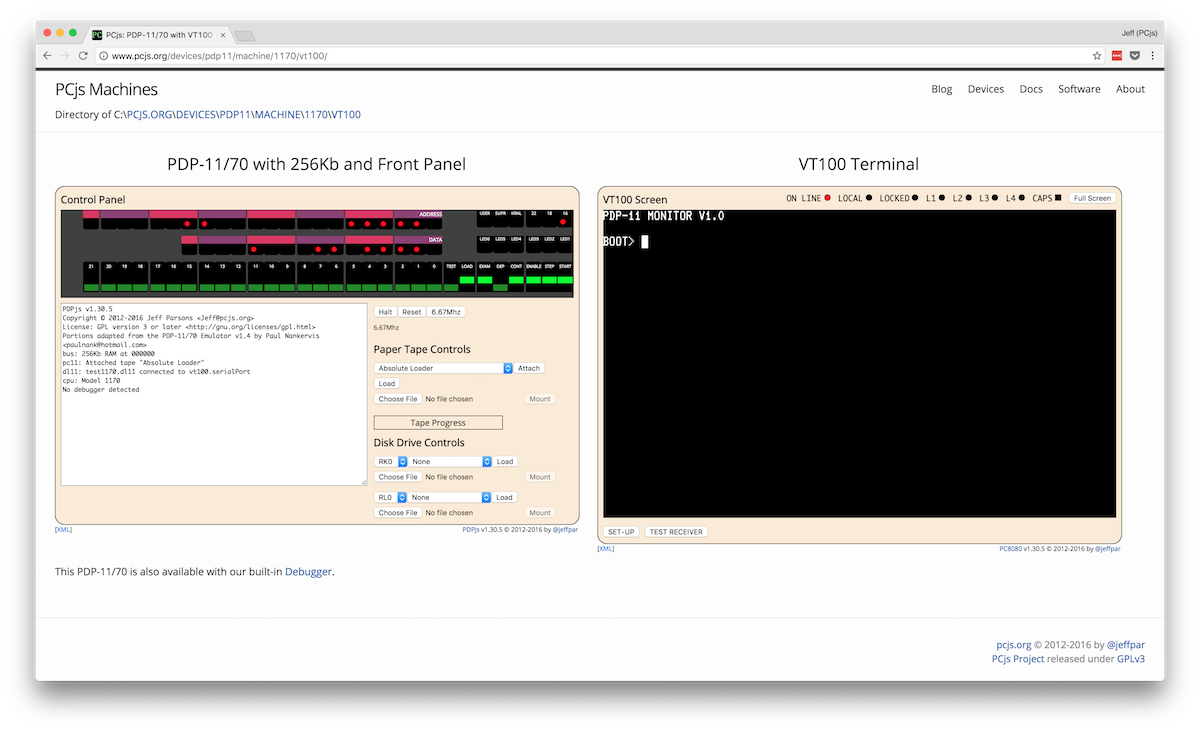 There were also a few important changes under the hood:

One more comment about BACKSPACE and DELETE: in the post-PDP-11, post-VT100 world of the IBM PC, BACKSPACE has come to mean “delete the character to the left of the cursor,” and DELETE now means “delete the character under the cursor.” Those are NOT what those keys meant to the average VT100 user. BACKSPACE was originally a non-destructive leftward movement of the cursor, whereas DELETE was a destructive leftward movement. So DELETE on a VT100 is what an IBM PC user would think of as BACKSPACE. To make matters worse, some modern keyboards now label the traditional BACKSPACE key as DELETE.

Finally, while we’re on the subject of keys, it’s worth making a note of the following VT100 Terminal Key Assignments:

Function keys are mapped as follows:

From the SET-UP screen, you can press 4 to switch to LOCAL mode and verify local operation of most VT100 keys. The following keys have special meaning inside SET-UP Mode.