A rather quaint piece of early IBM PC software was a program called Exploring The IBM Personal Computer. Created by Digital Learning Systems, Inc. and marketed by IBM, it was designed to walk you through the “ins and outs” of your shiny new IBM PC, and it came in two flavors: Monochrome and Color. 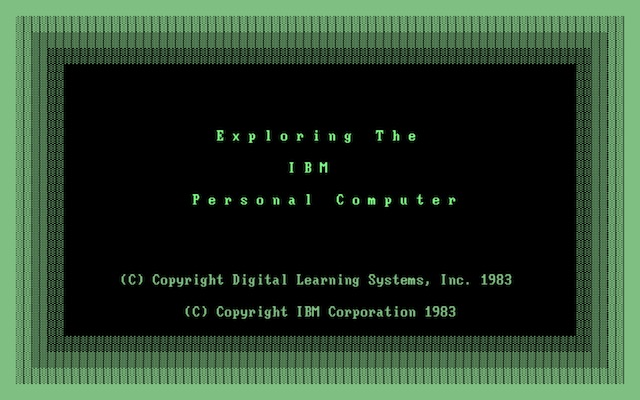 After playing some truly awful “music” through the PC’s speaker – for which I must also apologize, because the limited PC speaker support in PCjs manages to make it sound even worse – the software begins with a tour of your IBM PC’s keyboard.

In the screenshot below, notice the painstaking detail with which even the coiled cord of the PC’s keyboard is lovingly rendered.

Amazingly, this software was even updated for the IBM PC AT – not once but twice! On the bright side though, the second version did eliminate the “music”.

Unfortunately, when I first ran this program on PCjs, the introductory screen wasn’t fully erased, leaving most of the block characters around the border of the screen. 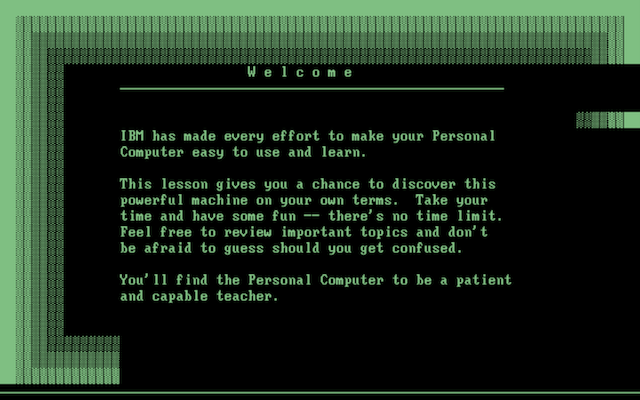 This was due to a bug in their call to the ROM’s INT 10h “Scroll Up” function:

which should have passed the coordinates of the top left corner of the scroll operation in CX and the bottom right coordinates in DX. However, as you can see above, they passed the top values in DX and the bottom values in CX, so when the ROM subtracts CX from DX to calculate the number of rows and columns to scroll (or in this case, to clear), it ends up with negative values, which it then treats as large positive numbers instead, and proceeds to erase a large swath of memory past the bottom of the screen.

This was an easy fix for the PCjs Video component, because the Bus component already supports aliasing blocks of memory to other addresses. Unfortunately, this required the Bus default block size to be no larger than 4K, and for machines with 24-bit or 32-bit buses, the Bus component preferred to divide the address space up into 16K or 32K blocks.

So I changed the block size to 4K for all machines, irrespective of bus width. Unfortunately, machines with saved states could still attempt to load states with an older (larger) block size, so I also had to add code to “fix up” blocks whenever a non-4K block was detected.

The good news is that, after dealing with all these ripple effects, Exploring The IBM Personal Computer now runs as intended. Well, except for the awful sound it makes, which I’ll be looking into at a later date.