A couple of weeks ago, I stumbled across this tweet that piqued my interest: 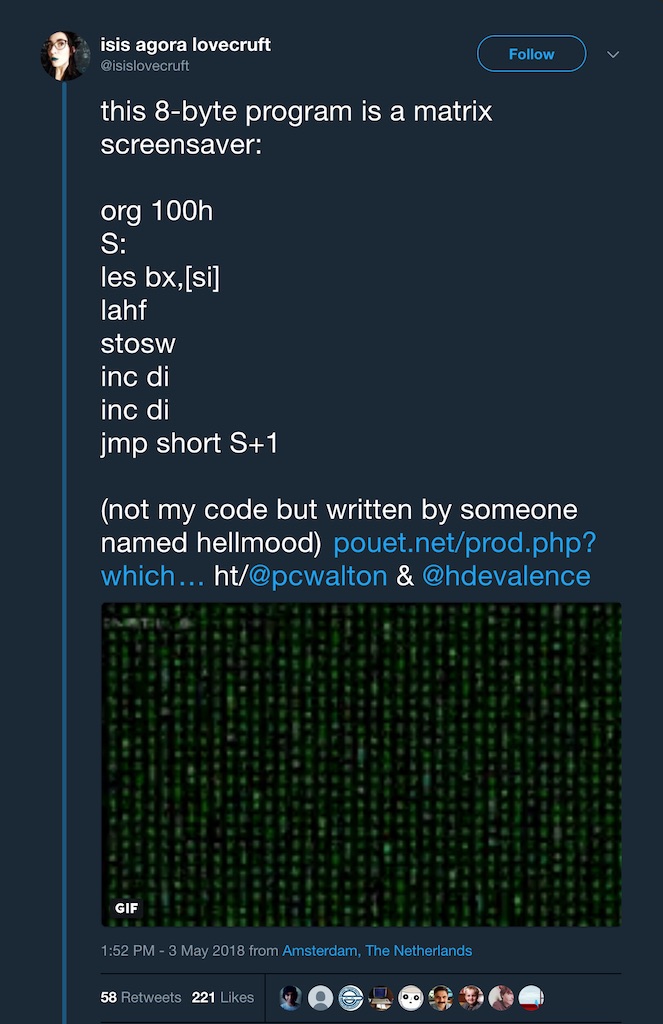 so I tweeted a PCjs link to a “live” demo of the program, which you can also see in operation below.

Waiting for machine "matrix-demo" to load....

However, this 8-byte DOS program:

which you can create using the following DEBUG command sequence:

comes with a few caveats. First of all, it doesn’t quite live up to the animated image that was included with the tweet, but it’s still cute.

Second, it’s dependent on some register entry conditions that are true only for very specific versions of DOS. It expects the SI register to contain 0x100 and the Carry, Parity, Auxiliary Carry, Zero, and Sign flags to all be clear. This handy table of initial register values shows the pitfalls of such an assumption: for example, the program won’t work on any version of DOS < 2.00. I’ve also tested it on PC DOS 3.00, where it fails because several of the arithmetic flags are not clear. It’s also not initializing the Direction flag, and if that flag happened to be set “down” instead of “up”, the program would effectively do nothing; STOSW would modify the same word repeatedly.

Third, if the program is loaded with DEBUG, most of the initial register values are completely different. DEBUG typically sets AL/AH to drive error codes (depending on whether the 2nd and 3rd command-line parameters are filenames), BX:CX to the size of the program, and SP to 0xFFFE (or the top of available memory minus 2). It also clears the DX, BP, SI, DI, and Flags registers, and since this program assumes SI will contain a non-zero value (0x100), it is incompatible with DEBUG.

Fourth, the program is writing through an entire 64K range starting at physical address 0xAB9F0 and ending at 0xBB9EF, so if there are any memory-mapped devices or UMBs in that range (other than the usual MDA or CGA text-mode frame buffers), something bad could happen.

The requirement that all the arithmetic flags be clear insures that AH will contain 0x02 after the LAHF instruction. Why doesn’t LAHF set AH to 0x00 instead? Because bit 1 of the Flags register is always set (it can’t be cleared), and LAHF loads all the low Flags bits into AH. Intel’s documentation says that Flags bits 1, 3, and 5 are “undefined”, but that simply means Intel preferred to not say anything about them. The reality is that bit 1 is always set and bits 3 and 5 are always clear.

And the value 0x02 is important, because it’s used as a video attribute byte, where bits 0-3 define a character’s foreground color (2 is green) and bits 4-7 define its background color (0 is black).

Someone else posted a 7-byte version that looks like this:

but which requires that CH be zero on entry. This version is slower, because it’s writing to every character cell on the screen, instead of every other cell, but it has a similar effect, because every odd write is using the value from CX, which contains a zero attribute in CH (black on black), making the pseudo-random character value in CL irrelevant.