Previously, the only way PCjs could run copy-protected software was to use patched binaries that bypassed any copy-protection checks, so that’s what I used in a few cases (e.g., Lotus 1-2-3). But last year, I acquired a KryoFlux device, which reads (and writes) all kinds of diskettes, and – in theory – captures everything you need to know to reproduce a diskette.

I’ve only used the KryoFlux software a few times, because most of the diskettes I’ve collected aren’t copy-protected and can be perfectly reproduced with programs like WinImage. But I did use it last year to read a set of original copy-protected IBM Multiplan 1.00 disks. And by using another program called HxC, I was able to inspect KryoFlux’s raw data from IBM’s Multiplan Program disk and discover what was unusual about it:

The only apparent oddity was the last (8th) sector on track 11: normally, the 8th sector would have a sector ID of 8, but instead it contained a sector ID of 61.

Fortunately, PCjs uses JSON-encoded disk images, which makes it trivial to annotate sectors with additional information. As PCx86’s disk.js explains, every JSON disk image is an array of Cylinder objects, where each Cylinder is an array of Track objects (one per head), and each Track is an array of Sector objects, each of which contains the following minimum set of properties:

In the case of IBM’s Multiplan, all I had to do was to change the appropriate Sector’s sector value from 8 to 61.

Early versions of Microsoft Word were also copy-protected, and since KryoFlux dumps of the original disks are available, I took a closer look with HxC: 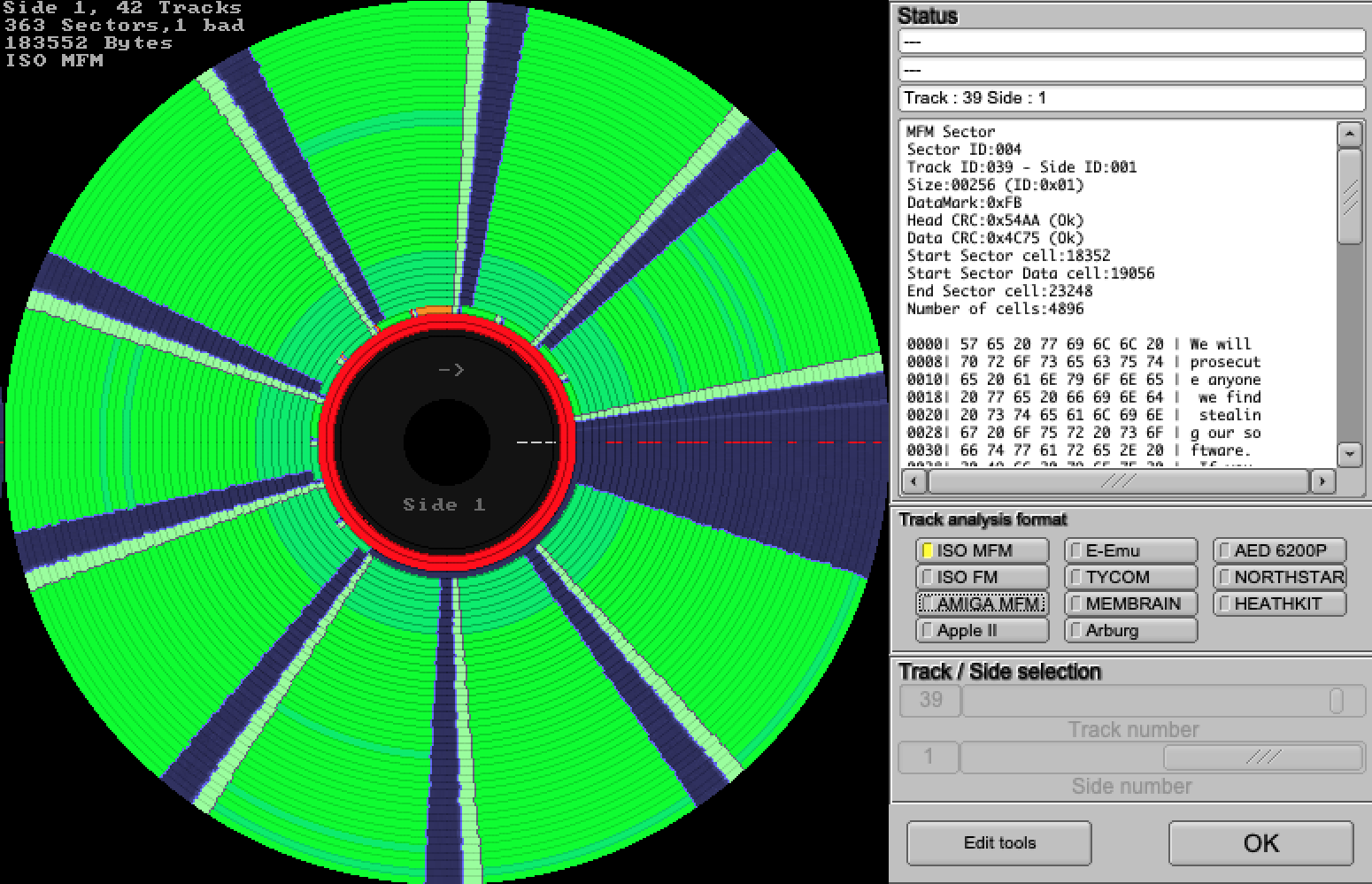 I discovered that the last track on the disk (track 39, side 1) contained 12 sectors instead of the 9 typically found on a 360Kb diskette, that the 5th sector contained a deliberate CRC error, and that the other 11 sectors were all 256 bytes in length, instead of the usual 512.

Here again, it was a simple matter to re-encode the PCjs disk image with 256-byte sectors and set a new “dataError” property in the 5th sector. PCjs version 1.75.0 now checks that property, returning a simulated CRC error whenever it is set.

So now PCjs can run both Microsoft Word 1.15 and IBM Multiplan 1.00 in all their original copy-protected glory.

The Night is Dark and Full of Errors

And WORD.COM contains the following messages:

Those messages are fairly easy to trigger. You just have to make WORD.COM think that a debugger is running. Using the PCjs Debugger won’t trigger it, because our debugger doesn’t run inside the virtual machine, so it can’t be detected. But you can simulate the effect.

which will stop execution at the point where WORD.COM is zeroing the single-step vector. Note that WORD tries to do this very inconspicuously, by zeroing the vector using an address (F800:8004) that wraps around to 0000:0004.

Anyway, after it’s been zeroed, simply write some non-zero values back to the vector:

and then let WORD continue running. Thousands of instructions later, WORD will notice that the vector has been altered and will display the above message, on the assumption that someone is trying to single-step the program and break the copy-protection checks.

Back in 1985, long after this code had shipped in Word and other Microsoft products, the “Trashing program disk” message apparently alarmed some customers. See “Microsoft Drops Some Protection” in the November 18, 1985 issue of InfoWorld.

When the message was first reported in InfoWorld’s October 28, 1985 issue, Jeff Raikes reportedly blamed the message on an unnamed programmer who place the “idle threat” into the program without the knowledge of Microsoft officials.

That sounds a little disingenuous but not particularly surprising. Corporations have long been masters at the art of deflecting blame and minimizing missteps.