Unlike IBM Multiplan 1.00, whose copy-protection relied on a single out-of-sequence sector ID, and Microsoft Word 1.15, which used smaller-than-normal sectors (including one with an invalid checksum), dBASE III 1.0 was shipped on diskettes that were physically altered in a way that no floppy disk controller could duplicate.

At least one other emulator has already accomplished this feat. And I had already debugged and defeated dBASE III copy-protection almost 35 years ago.

However, something that’s missing from both contemporary and modern reports is any real explanation of how this particular copy-protection scheme worked or how feasible it might be to duplicate using modern hardware.

Even my own old notes don’t shed much light on it, since at the time, my focus was disabling the copy-protection code. I was interested only in identifying the code, preventing it from disabling the debugger (DEBUG.COM), finding the point where it decides whether the disk is OK, and designing a patch to disable it. Most of my notes were a record of my education on the operation of the DMA and Floppy Disk Controllers, because the code did everything itself, without any ROM BIOS assistance.

Ashton-Tate, the maker of dBASE III, used a copy-protection scheme developed by Vault Corporation called PROLok, which reportedly involved using a laser to burn a small “hole” into a predetermined area of the disk, and then incorporating code into the application which would analyze the sector containing that hole. If the analysis failed, the application would report:

and terminate. In the KryoFlux visualization below, this “hole” appears on the dBASE III 1.0 (Disk 1) on track 39, sector 5 – the orange arc immediately to the left of the two red rings. 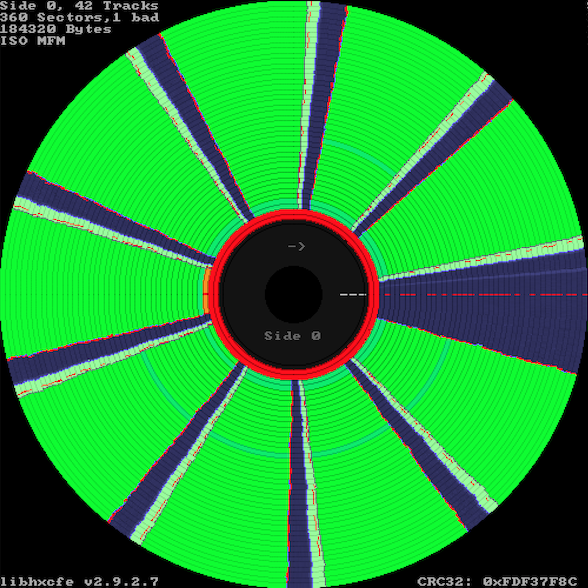 Press reports at the time were slightly misleading, as there was no actual “hole”. A laser may have been used, but only to damage – not puncture – a single sector on one side of the disk. Moreover, the damage had to occur somewhere in the middle of the target sector, allowing a certain number of bytes to still be written to the beginning of the damaged sector.

With that in mind, here was the basic logic of the PROLok copy-protection check:

Since the first part of the sector is undamaged, a certain number of bytes should contain new data after the write. The PROLok code knows where the damaged area begins (within +/-10 bytes), so after it performs that last read, it expects to see new data only up to that point.

For an emulator, duplicating such an error is fairly straightforward, and in PCjs, it’s almost trivial. All I had to do was add a new dataError property to the damaged sector of the JSON-encoded disk image. The value of this new property specifies the maximum number of bytes that can be written; any bytes written beyond that point are now ignored by the PCjs Floppy Disk Controller.

This mimics what happens with a real PROLok disk. For example, some 200+ bytes may be successfully written to a damaged 512-byte sector, and those 200+ bytes will be returned on a subsequent read, but the rest of the bytes are unmodifiable and invalid, so they will never change, and they will always trigger a CRC error as well.

Even today, duplicating this kind of error on another physical disk still seems very problematic. Without disk duplication hardware that can somehow create the same kind of “damage” in the middle of a sector, it’s hard to see how another working physical copy of the disk could be made.

From a software preservation standpoint, it might be sufficient to simply duplicate all the undamaged sectors and call it a day, since – at least in the case of PROLok – there isn’t any code or data in the damaged sectors that needs to be preserved. But if the preservation goal includes being able to run the software exactly as it originally existed, on original hardware, that goal becomes extremely challenging.

In the case of software like dBASE III, our choices appear to be:

It’s also unclear how well the “annotated disk image” approach that PCjs uses could be automated. For a PROLok-style diskette, one can imagine a duplication process that doesn’t simply read every sector, but also writes modified data to every sector, in order to determine to what extent, if any, each sector can be modified. But all we’d be doing is “copying” the PROLok logic, which might work great for PROLok diskettes but not so great for other kinds of physical modifications.

Another concern is that such a process could be inadvertently destructive. There’s something inherently disturbing about a duplication process that involves writing modifications to the original diskette.

I didn’t have to wrestle with that concern, however, because I no longer have an original diskette. All I had was a KryoFlux dump, which doesn’t tell you much about the physical condition of the diskette. So I resorted to debugging the software again (as I did 35 years ago), watching the reads and writes, observing what PROLok’s expectations were, inferring that one of the 512-byte sectors must have been physically damaged within +/-10 bytes of the 272nd byte, and then recording that in my annotated disk image.