More recently (January 2018), I discovered that I still had a copy of the 1986 Rev F ROM, which I had made on April 22, 1987, using one of the early DeskPro 386 machines that Microsoft had purchased for the OS/2 development team. The only downside of my Rev F ROM image is that it was dumped using the DOS DEBUG utility, since I didn’t have ROM reader hardware in those days.

Fortunately, since I wasn’t sure how large the ROM actually was, I had dumped the entire 64Kb from F000:0000 through F000:FFFF. As it turns out, that entire address range is actually write-protected RAM (since RAM provided faster 32-bit access), where the first 32Kb contained a modified copy of the second. For example, the first 32Kb contains some data structures that are updated by COMPAQ utilities such as CEMM to record “Built-in Memory” allocations.

Sure enough, attempting to use the first 32Kb as a DeskPro 386 ROM generated a “ROM Error”, no doubt due to a checksum mismatch. However, the second 32Kb appeared to work fine. I can’t guarantee that its contents are identical to the original Rev F ROM, since it was not a direct copy of the physical ROM, but it’s all we’ve got. All the PCjs EGA-based COMPAQ machine configurations have been updated to use that ROM.

This collection of COMPAQ DeskPro 386 ROMs still has several holes, but I’m very happy to have finally found one of the earliest (if not the earliest) ROMs commercially available for this line of COMPAQ computers.

1988-01-28.json was created with the following FileDump command:

For a more human-readable dump, use the --comments option:

The .hex files for the 1988-01-28 DeskPro ROM were produced by running eeprom_read on a chipKIT Uno32 Arduino-compatible prototyping board, and capturing the serial port output on my MacBook Pro – as outlined in “Stick a Straw in Its Brain and Suck: How to Read a ROM” by NYC Resistor contributor phooky. 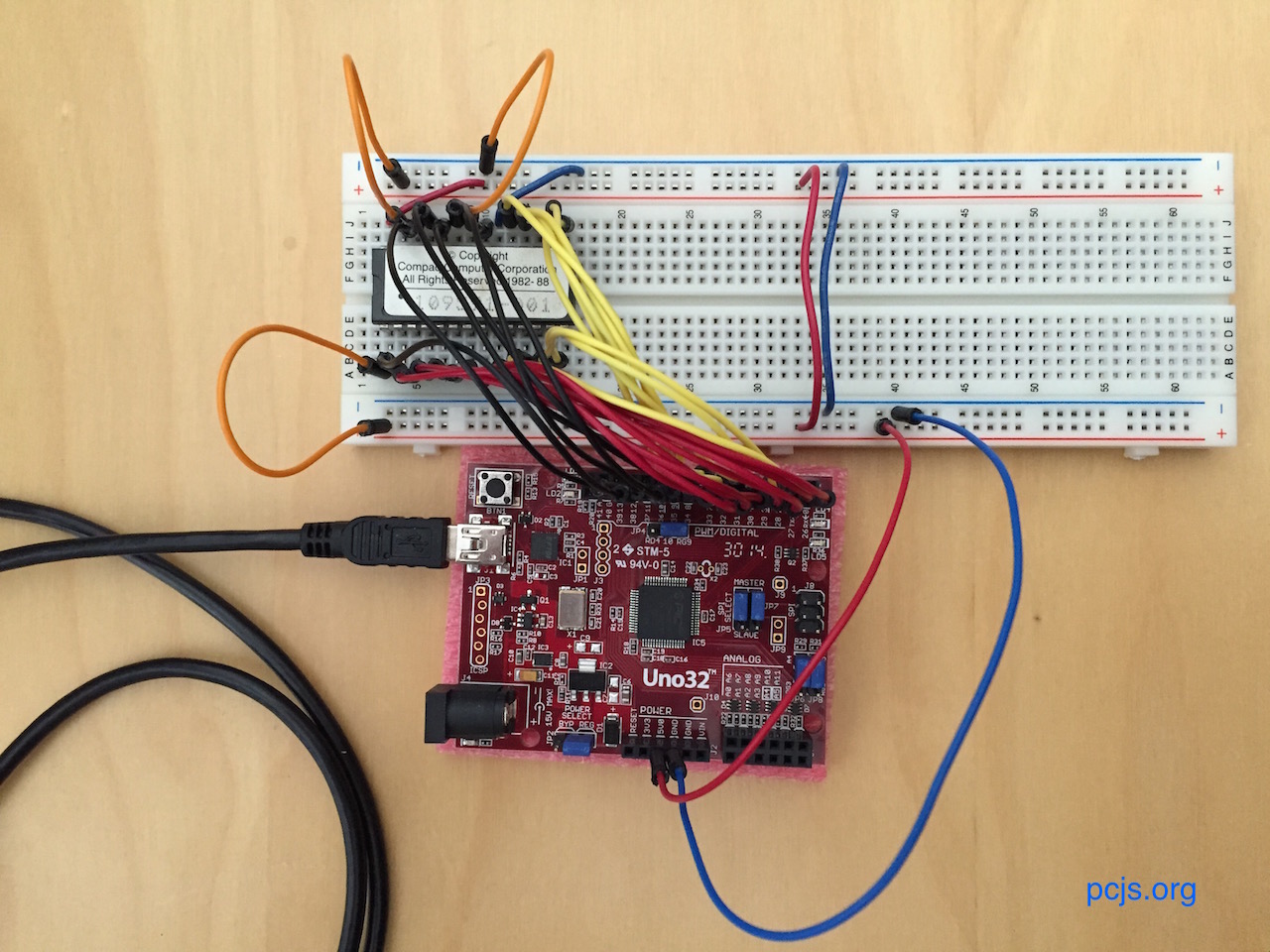 In the current directory, an original ROM can be regenerated from the JSON-encoded file:

The ROM can then be fed into NDISASM, the disassembler included with NASM:

The -o0x8000 argument is required to “org” the file at the proper starting address, but the -s arguments are optional; they simply establish a few sync points within the ROM image that save a little cleanup effort, by preventing disassembly in the middle of instructions.

Next, the PCjs TextOut command, with the –nasm option, prepares the code for reassembly:

The result, 1988-01-28.asm, after a small amount of manual cleanup, can now be successfully reassembled:

However, it does NOT produce a binary identical to the original ROM, in part because of instruction ambiguities (ie, instructions that can be assembled multiple ways). It’s possible the reassembled ROM may still work, but more research is required.

Authors of the COMPAQ DeskPro 386 ROM

One interesting section of the COMPAQ DeskPro ROM is this string at offset 0xE002:

which presumably contains the initials of 5 authors: CAB, GLB, RWS, DJC, and NPB.

This was later confirmed by HPE firmware engineer Thomas Palmer, who still works at the location of COMPAQ’s headquarters in Houston, Texas. On June 19, 2018, Thomas arranged a reunion for the authors and as many other COMPAQ engineers as he could locate, all who worked on early COMPAQ products and still lived in the area.

Thanks to Thomas, I was able to attend the reunion, and the engineers who worked on the DeskPro 386 were gracious enough to sign my copy of the COMPAQ DeskPro 386 Technical Reference: 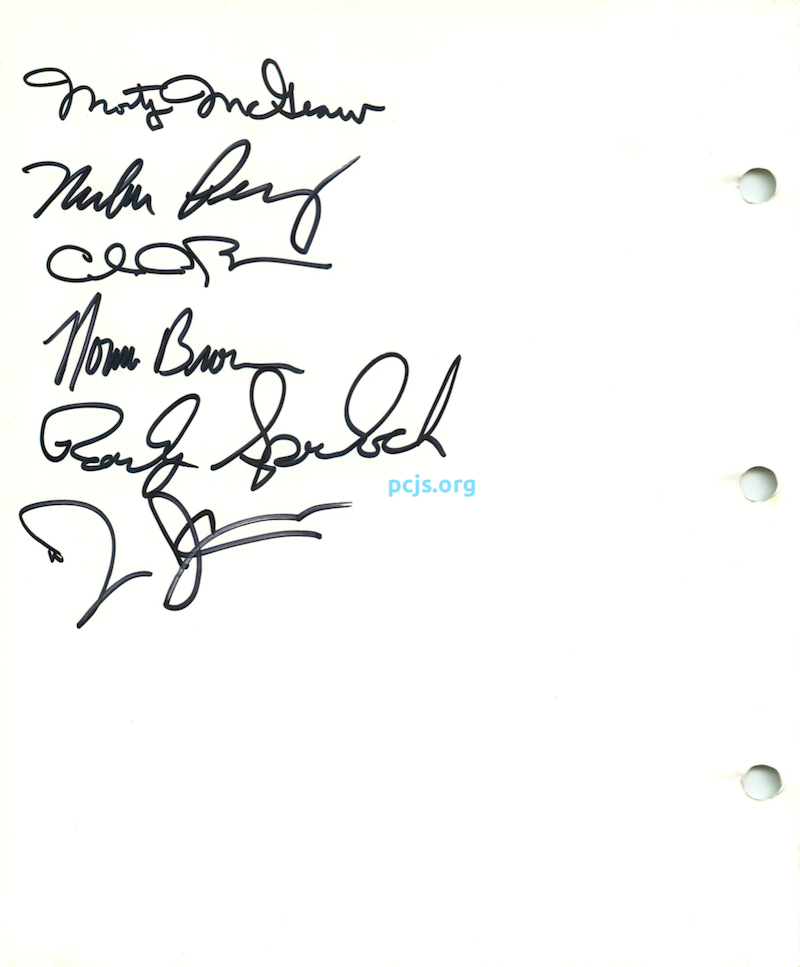 Of the 5 people whose initials are embedded in the original DeskPro 386 ROM, only GLB was unable to attend.

The meaning of the “93” sequences in the ROM was originally unclear – I thought they were likely some form of obfuscation – until I saw this snippet of COMPAQ ROM source code and we were able to talk to Mike Perez about it:

Mike explained that an IBM program called “Exploring the IBM Personal Computer” contained some code that checksummed the first few bytes of the ROM and would refuse to run if the result didn’t match that of a genuine IBM PC. So one of the COMPAQ engineers simply inserted a series of characters (“93”) between their initials which, when checksummed, yielded the same result.

This was one of the many hallmarks of COMPAQ’s devotion to compatibility.