Both calculators used the same basic chip. In the TI-57, the chip was designated “TMC1501”, and in the TI-55, it was “TMC1503”, but both were TMS-1500-compatible. The primary difference between the chips was the contents of their ROMs. And I’m not sure the TI-55 ROM was available anywhere previously, until now, thanks to Sean Riddle.

It’s possible that the TI-55 was produced first, and then programmers at Texas Instruments were able to optimize the ROM, increasing the number of programming steps from 32 to 50 and adding support for loops and conditionals, which they then marketed as the slightly more powerful TI-57. However, that’s pure speculation on my part. It’s more likely that they decided up front to create several devices with the same hardware, providing different capabilities to different audiences, and possibly at different price points.

Also, the fact that the TI-55 uses a chip with a higher designation (“1503”) than the TI-57 (“1501”) suggests that the TI-55 may have been finished after the TI-57, and that the lower model number was simply a reflection of its more limited programmability. Finally, Sean Riddle points out that since the TI-55 and TI-57 produce different results for the “Calculator Forensics” test, the ROMs may have even been developed by different teams at Texas Instruments.

It may be worth undertaking a detailed comparison of the TI-55 ROM and TI-57 ROM at some point, because the TI-57 has fewer built-in functions, as evidenced by the smaller of number of “dual function” buttons, and yet the TI-57 ROM appears to be almost completely full.

In fact, the TI-57 ROM apparently didn’t even have room for this simple TI-55 feature, described on page 4 of the TI-55 Owner’s Manual:

Your calculator is designed to be energy efficient. After about 1 to 3 minutes of non-use, the display will shut down to a single decimal point traveling in the display. To restore the display at any time, just proceed with a calculation, or press the 2nd key twice.

I’m surprised they couldn’t be a little more precise about the time-out (“1 to 3 minutes”?), but the point is, it’s just another feature that didn’t (and presumably couldn’t) make it into the TI-57 ROM.

NOTE: It’s possible I don’t have the TI-55 Emulator properly clocked yet, because you have to wait approximately 3 minutes and 40 seconds before the “traveling decimal point” appears. 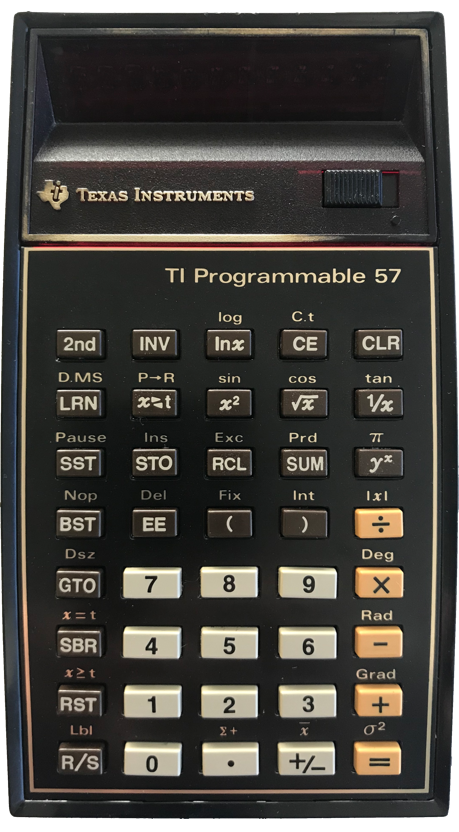