When I first created the PCjs x86 emulator, PCx86, it was a simple implementation that focused primarily on four components:

There was no support for a serial port, parallel port, mouse, hard disk, numeric coprocessor, EGA or VGA, or newer x86 processors like the 80286 and 80386. All those things came later.

Of those first four components, the most complicated was the Video component, and what added to the complexity was my desire to faithfully emulate (as best I could with my limited JavaScript experience) all the major features of the MDA and CGA video cards, including:

I also wanted to make sure the PC’s video buffer was rendered efficiently onto the browser’s canvas, so that I could maintain a 60Hz video refresh rate alongside the CPU’s 4.77Mhz clock speed. As it turned out, that goal wasn’t very hard to achieve, thanks largely to how efficient JavaScript engines have become in recent years.

And like most projects, in order to get something up and running as quickly as possible, I took a few shortcuts and faked a few things, the most notorious being the retrace flags.

Both the monochrome and color screens used by the IBM PC employed Cathode Ray Tube (CRT) technology, which involved magnetically directing an electron beam to draw scan lines horizontally (left to right and top to bottom) across the screen. After every scan line was finished, the beam had to be turned off (“blanked”) and redirected back to the left side of the screen, and after the entire screen was finished, the beam had to be blanked again while it was redirected back to the top of the screen. This entire process was usually repeated 60 times per second; however, IBM’s monochrome monitor, thanks to the high persistence of its green phosphor, was refreshed only 50 times per second.

The “blanking” intervals are also known as horizontal and vertical retrace periods, which is how I usually refer to them.

Most PC software was completely oblivious to video retrace, especially software that wrote to the screen indirectly, using either DOS or ROM BIOS services.

Since interference is a non-issue for emulated hardware, a simple solution was to merely toggle the STATUS retrace flags every time they’re polled. Toggling is important, because if you all you did was set the retrace flag(s), some software would break; specifically, any software that tried to wait for the start of the next retrace period, by looking for a transition, in order to maximize the amount of time it had to safely write to the video buffer.

Also, by performing a quick toggle, the emulator could often make software that polled the retrace flags run faster than normal. For example, the following ROM BIOS code would automatically run faster: 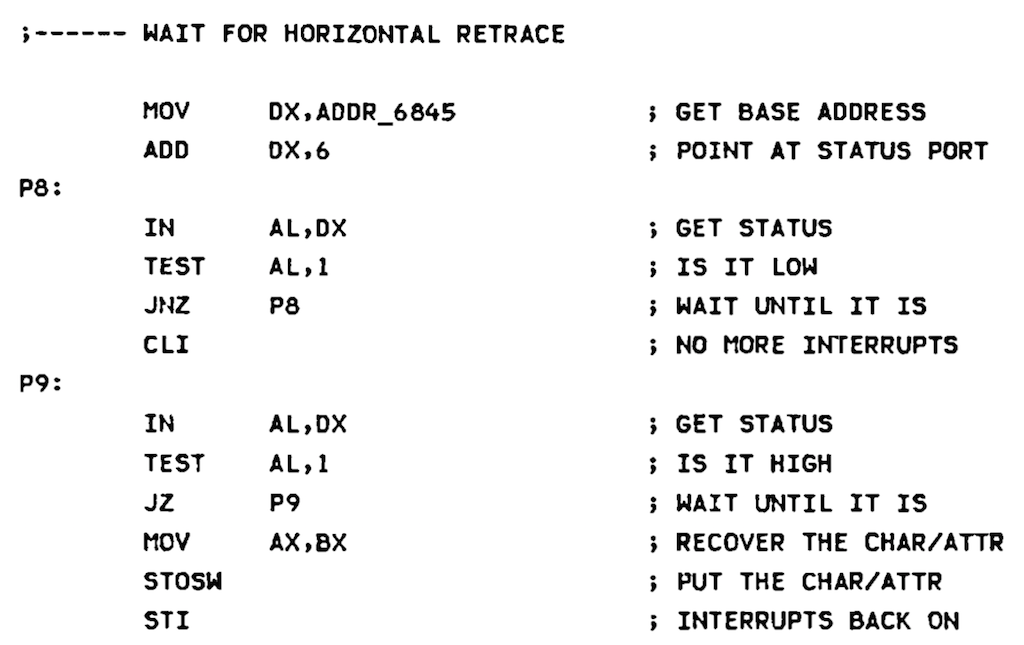 In the case of PCjs, making old code run faster was not actually a goal, because I wanted to recreate a 4.77Mhz experience, but most emulators don’t care about that, so for them, a solution like this is a “win-win.”

Growing Up Means Not Faking It Anymore

Unfortunately, over time, cheap solutions start breaking down, and as PCjs video support expanded from the lowly MDA and CGA cards to the much more powerful EGA and VGA cards, the work-arounds were getting uglier.

For example, one of Michael Abrash’s VGA “Black Book” Tests:

relied on a couple of critical features of the EGA:

However, if we’re just toggling the retrace bits “willy-nilly”, then we’re not really helping the app, and more importantly, we’re not helping ourselves know when we should honor (or not honor) the contents of registers like the CRT Controller Start Address.

As a result, images initially produced by L23-1.ASM would “jerk” horribly, until I put some work-arounds in place.

That was a few years ago. Fast-forward to my recent efforts to run Fantasy Land, which performed pixel-panning much like L23-1.ASM, but in text mode rather than graphics mode, and also required:

none of which I had supported up to that point. Pixel-panning of text mode alone was doubly challenging, not merely because it needed to be synchronized with vertical retrace, but because it also required “over-drawing” the entire screen by an additional column and row of text into an intermediate off-screen bitmap.

This was the app that broke the camel’s back. The only solution – or rather, the best solution – to all the retrace-related issues was to create a new periodic timer function, startVerticalRetrace(), that synchronized all these video operations:

So now, based on video card and type of monitor, an appropriate refresh rate is determined. The refresh rate is converted into a corresponding number of CPU cycles, and then a CPU timer calls startVerticalRetrace().

I’ve also slipped in a few other tweaks to startVerticalRetrace(), such as throttling the screen update rate if screen updates seem to be taking an unusually large percentage of the retrace period. On desktop machines, this rarely happens, but I’ve seen it happen on mobile devices and on pages where multiple machines are running side-by-side.

And I’ve made some improvements to the Video cell cache, to help minimize the number of pixels or character cells that must be redrawn. Programmable fonts and the way in which Fantasy Land rapidly toggles the active font required an additional “FontDiff” cache, so that we could quickly determine which on-screen characters needed to be redrawn after a font change.

Fantasy Land wasn’t a particularly well-known program, but it definitely has its place among historically significant PC software, and thanks to it, PCjs video emulation is now better for it.