I recently obtained a copy of Microsoft Programmer’s Library 1.0, a CD-ROM released in 1988. Microsoft had released only a handful of products on CD-ROM at that point, the first being the 1987 edition of Microsoft Bookshelf, so this is one of Microsoft’s oldest CD-ROMs.

The promise of CD-ROM is fast access to huge volumes of information. Microsoft has taken another step toward the fulfillment of that promise with the release of Microsoft Programmer’s Library, which packs more than 20,000 pages of reference material and sample code onto a single CD.

A few months later, Microsoft released Stat Pack ($125) and Small Business Consultant ($149), which sound like real yawners by comparison. According to the March 14, 1989 issue of PC Magazine:

Stat Pack comprises the full text and tables of five federal government publications: The Statistical Abstract of the United States 1987, Public Land Statistics, Survey of Current Business, Area Wage Surveys, and Agricultural Statistics. Every table comes in both .WK1 and .XLS formats for easy importation into your spreadsheet program.

Interestingly, those old CD-ROMs can still be purchased on eBay for around $100 each, so maybe they’ve actually held their value better than Microsoft Programmer’s Library, but they certainly hold no interest for me. 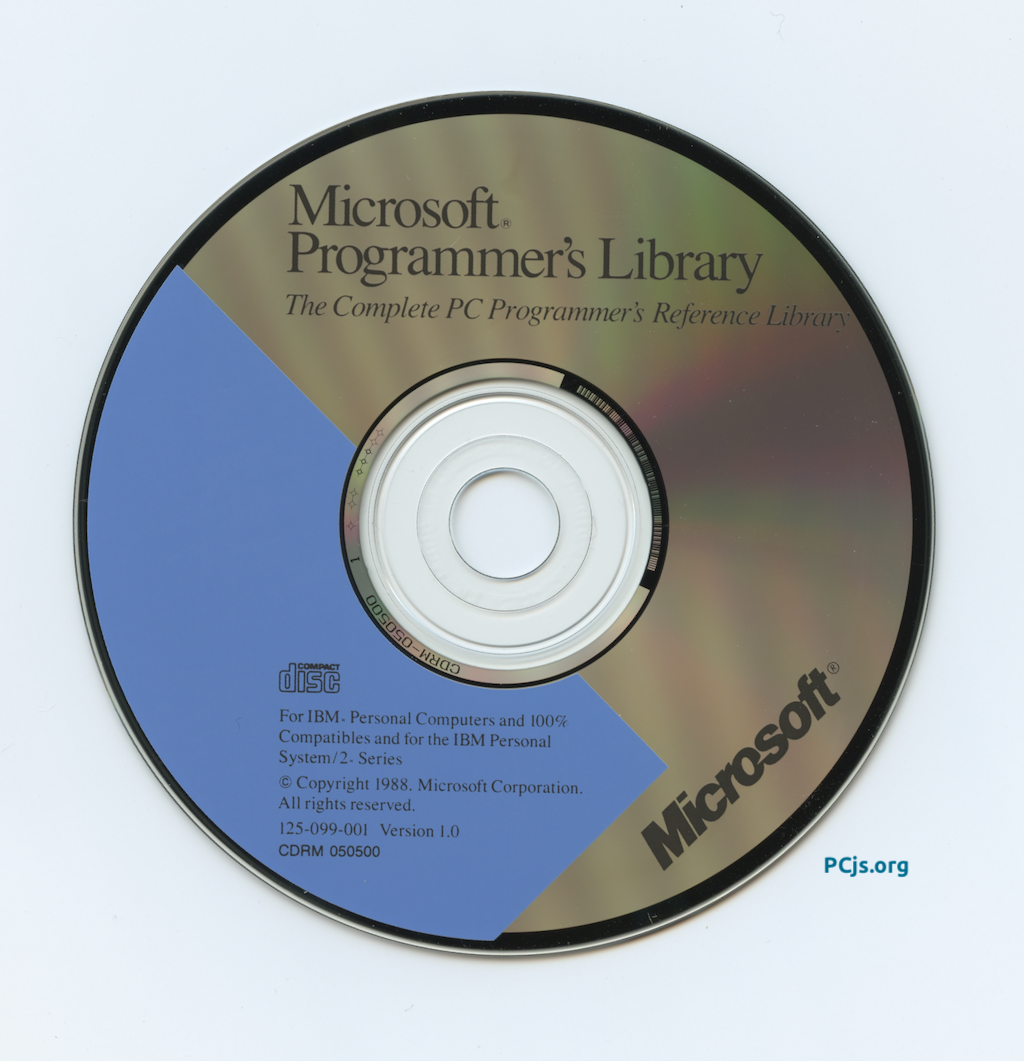 Described on the back of the box as “[t]he single source for answers to most programming questions,” the Microsoft Programmer’s Library CD-ROM contained:

It’s worth noting that this first version of the Programmer’s Library does not appear to contain any Microsoft KnowledgeBase articles. Those may not have been added until the 1.3 release of the library in 1991.

Since CD-ROMs are more interesting if you can actually use them, I decided to add CD-ROM support to PCjs. To demonstrate, the IBM PC AT below has been configured with a secondary ATA controller that responds to ATAPI commands, allowing the use of a virtual ATAPI CD-ROM drive.

When you click the list of removable disk drives, you should see a “CD” drive in the list, along with a handful of disc (ISO) images that have been added to the online PCjs disk library. Currently, those include:

The machine is using the same hard disk image created for Microsoft Windows 3.1. The disk’s CONFIG.SYS was modified to load a real-mode ATAPI CD-ROM driver, and its AUTOEXEC.BAT loads the Microsoft CD-ROM Extensions (MSCDEX.EXE).

After the software has been installed on the hard disk, run MSL.EXE to load it. It was designed as a “terminate-and-stay-resident” (TSR) utility, which means after it loads, it returns control to the shell. In other words, if you run it from COMMAND.COM, control will return to the command prompt, and if you run it from Windows, you will see the following message:

which you gives you the opportunity to activate the utility before control returns to Windows.

The default activation key sequence is LEFT SHIFT + ALT. Press and then release both keys to activate the library’s menus. 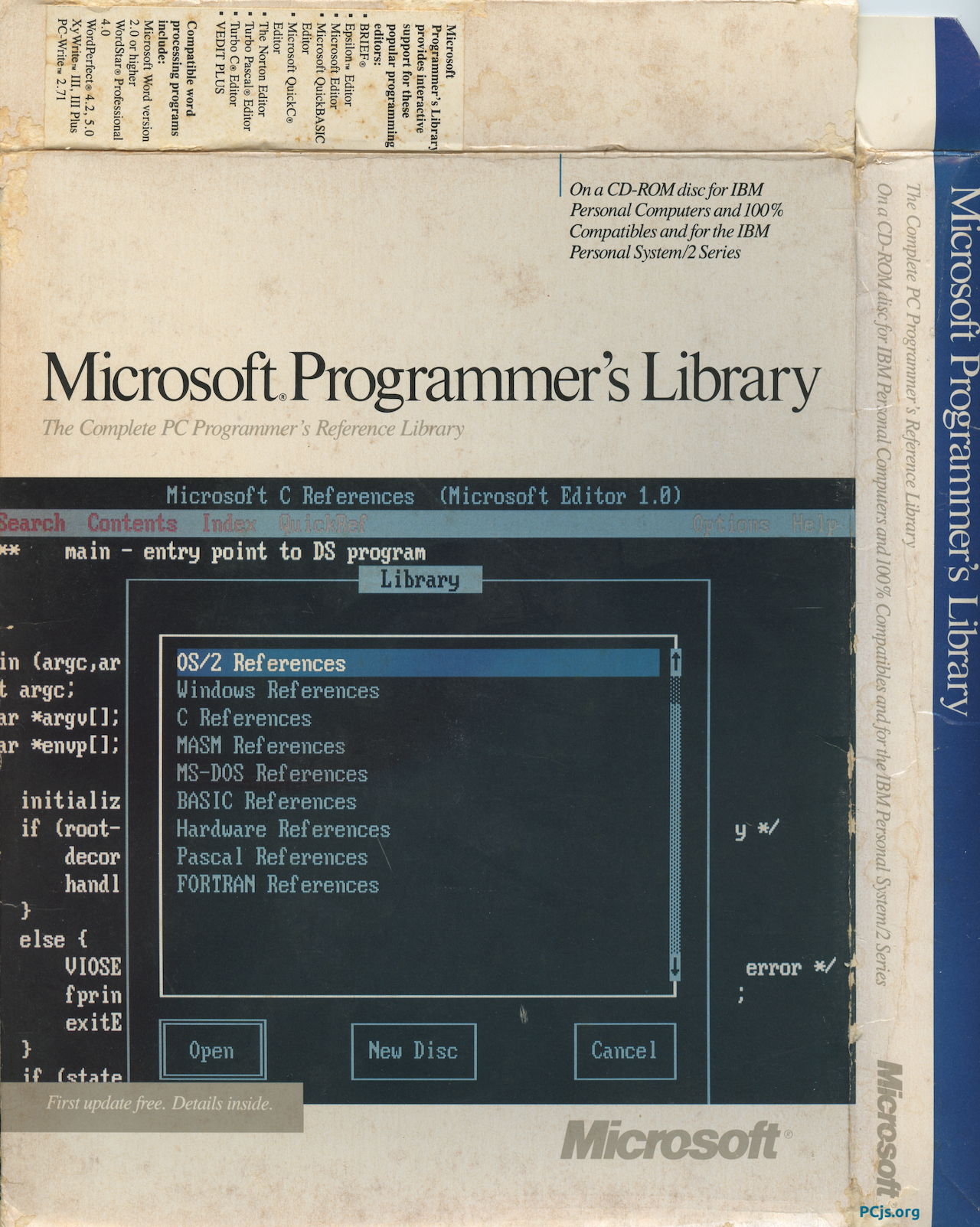 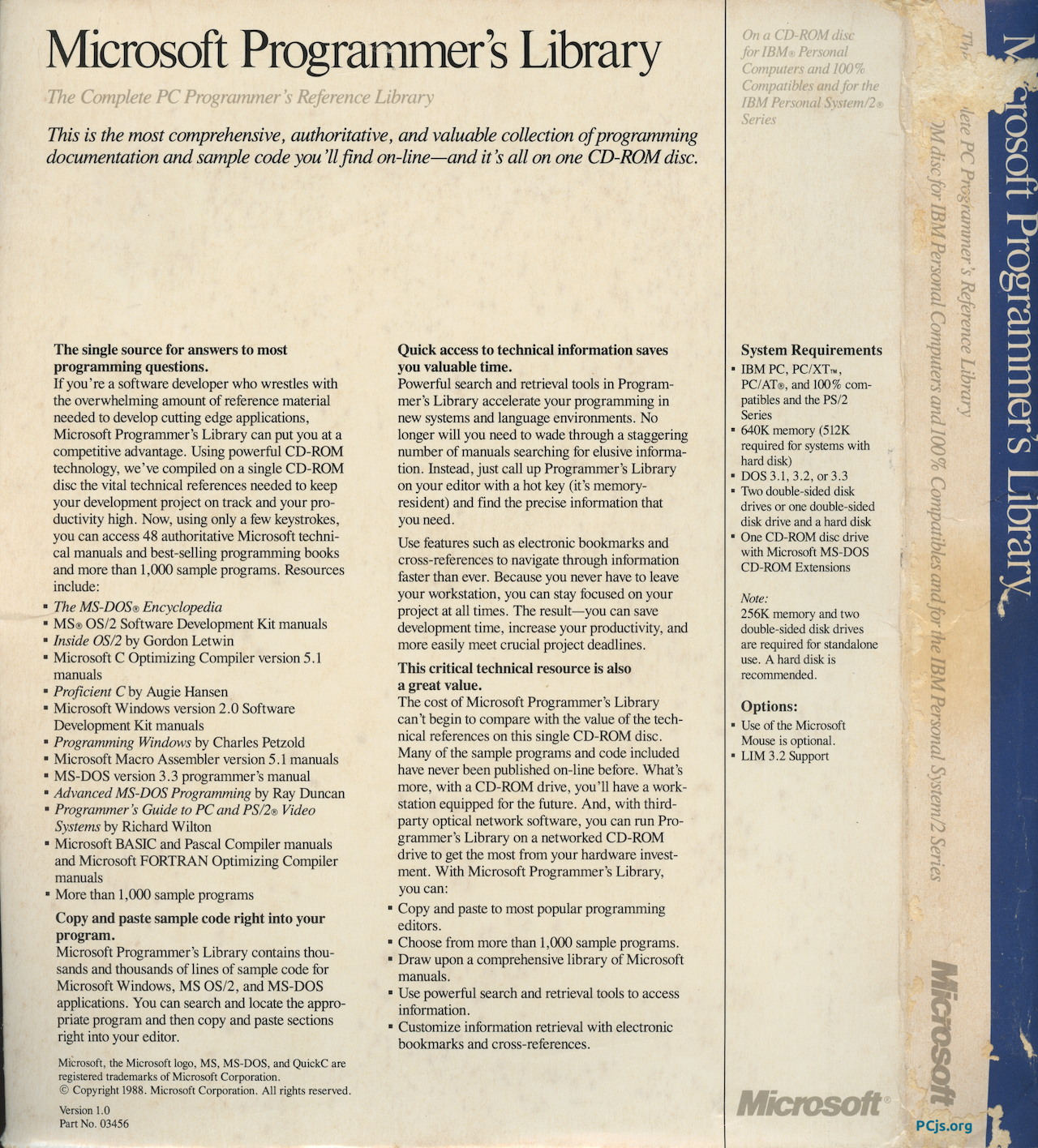