This is the COMPAQ Video Graphics Controller Board, one of the earliest VGA boards COMPAQ released for its DeskPro 386 line. 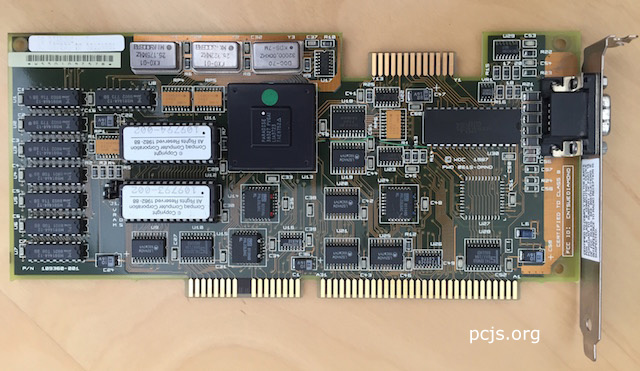 It was featured in the February 16, 1988 of PC Magazine (p.188). At that time, it retailed for $599, and it was described as “the sharpest, fastest IBM-standard video board you can slide into your PC.” The article goes on to say:

The Compaq [Video Graphics Controller Board] is the first truly hardware-compatible VGA board with register-level support for all 17 video modes. It’s also the first video board from a major manufacturer that uses a full 16-bit interface….

Based on a Paradise Systems VLSI VGA chip and an Inmos DAC, the board includes 256K RAM soldered to it. Relying on surface-mounted components for just about everything except its BIOS and the aforementioned chips, the entire board is just 9 inches long and XT height. Although it will function in an 8-bit expansion slot, it achieves its top speed only when its 16-bit interface is put into play.

The card-retaining bracket of the board holds only the female DB-15 of the IBM VGA system. This connector, coupled with the analog output of the board, means that the [board] will function only with VGA-style monitors.

An extra edge connector at the top of the board matches the video expansion available on the IBM PS/2 Display Adapter card, electrically but not physically compatible with the VGA Feature Connector of PS/2 computers.

To your system, the board looks like an EGA adapter–that is, you run the appropriate setup procedure for setting CMOS memory as if it were an EGA card. The two jumpers on the board (its only hardware adjustments) alter its base address for matching unusual systems and ordinarily require no change.

In testing, the Compaq Board proved itself functionally compatible with the IBM PS/2 Display Adapter but faster, because of its 16-bit interface. On an ordinary AT, it nearly achieved the display speeds of the internal VGA system of a stock PS/2 (which has a clock speed advantage over the AT).

Although Compaq claims that this board is designed specifically for its own machines, particularly the DeskPro 386/20, it works great with non-Compaq machines as well. In fact, with this board, Compaq gives you a way of getting the sharpest and fastest graphics without abandoning your commitment to the PC standard. As such, this board is in perfect accord with the Compaq philosophy, and it may be the best way available for mating a VGA-style monitor and VGA graphics to your AT.

A copy of the board’s VGA ROM BIOS was created by dumping the contents of each EPROM chip to a .hex file, and then merging the .hex files with the following FileDump command:

For a more human-readable dump, use the --comments option:

Four of the authors – RWS, NPB, DJC, and CAB – are also listed as authors of the DeskPro 386 ROM BIOS.