Before acquiring a copy of the 1988 Microsoft Programmer’s Library 1.0 CD-ROM, the oldest Microsoft CD-ROM I owned was the 1991 edition of Bookshelf for Windows. 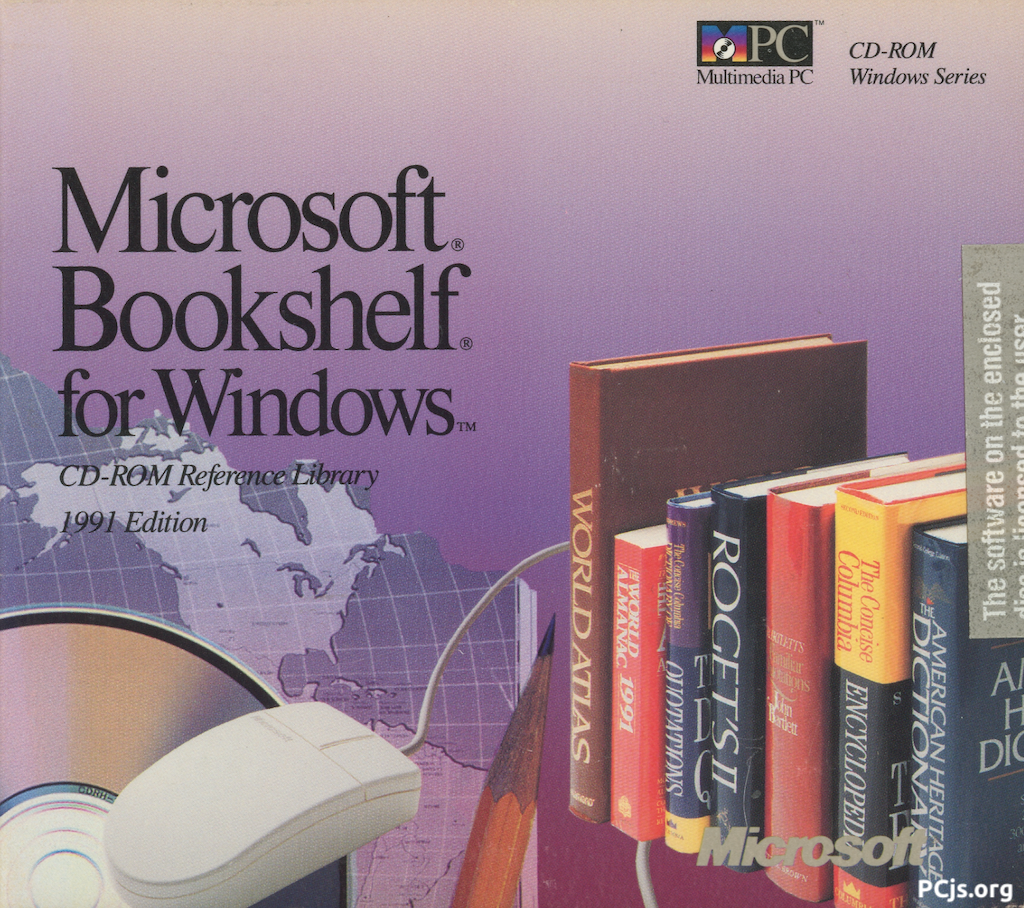 I recently decided to add CD-ROM support to PCjs, starting with the venerable IBM PC AT. Early IBM PC-compatible CD-ROM drives would come with their own ISA controller boards, but I had no desire to emulate the hardware of old third-party controllers that probably also had very little existing documentation. The advantage of starting with the IBM PC AT is that its hard disk controller was the basis for future ATA and ATAPI controllers, so adapting the AT’s controller to support ATAPI commands was the simplest way to connect a simulated CD-ROM drive to a PCjs machine.

Once I had CD-ROM support limping along, I decided to try Bookshelf for Windows on Windows 3.1. 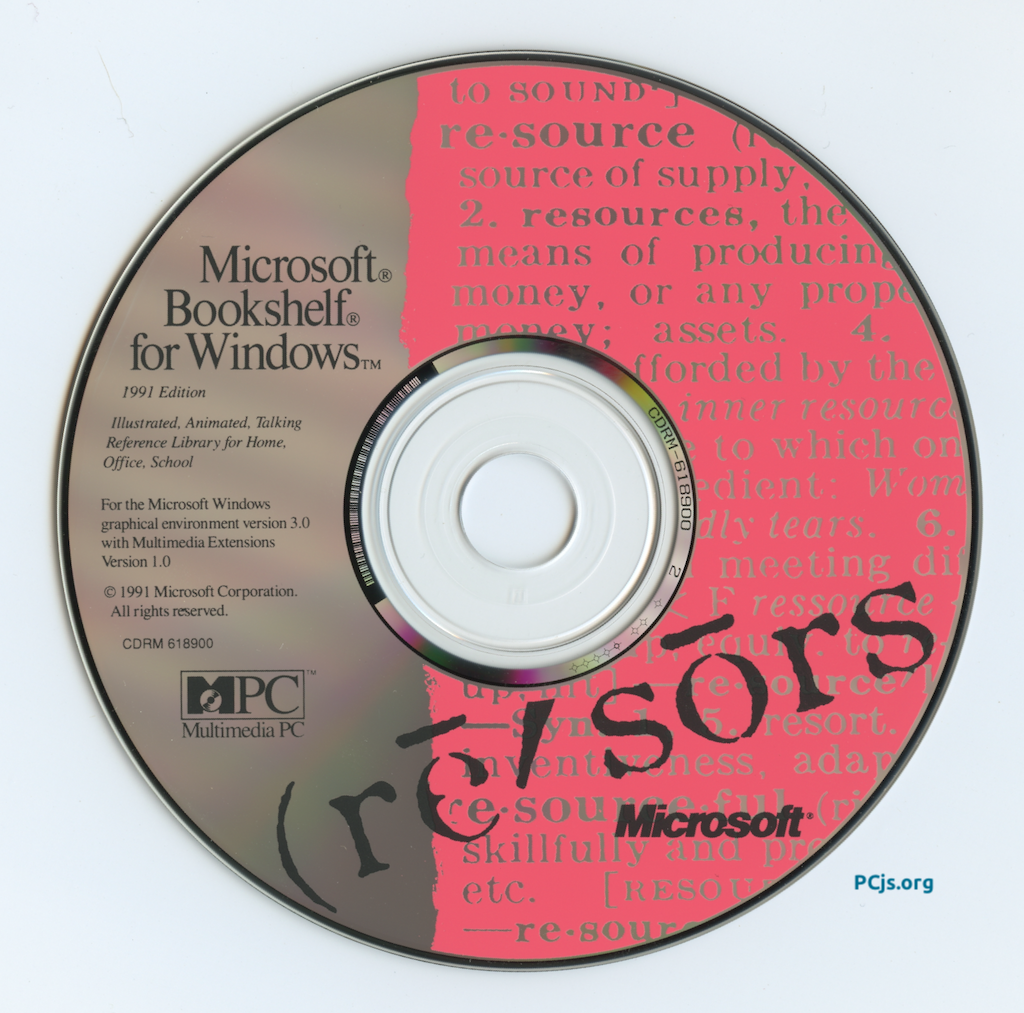 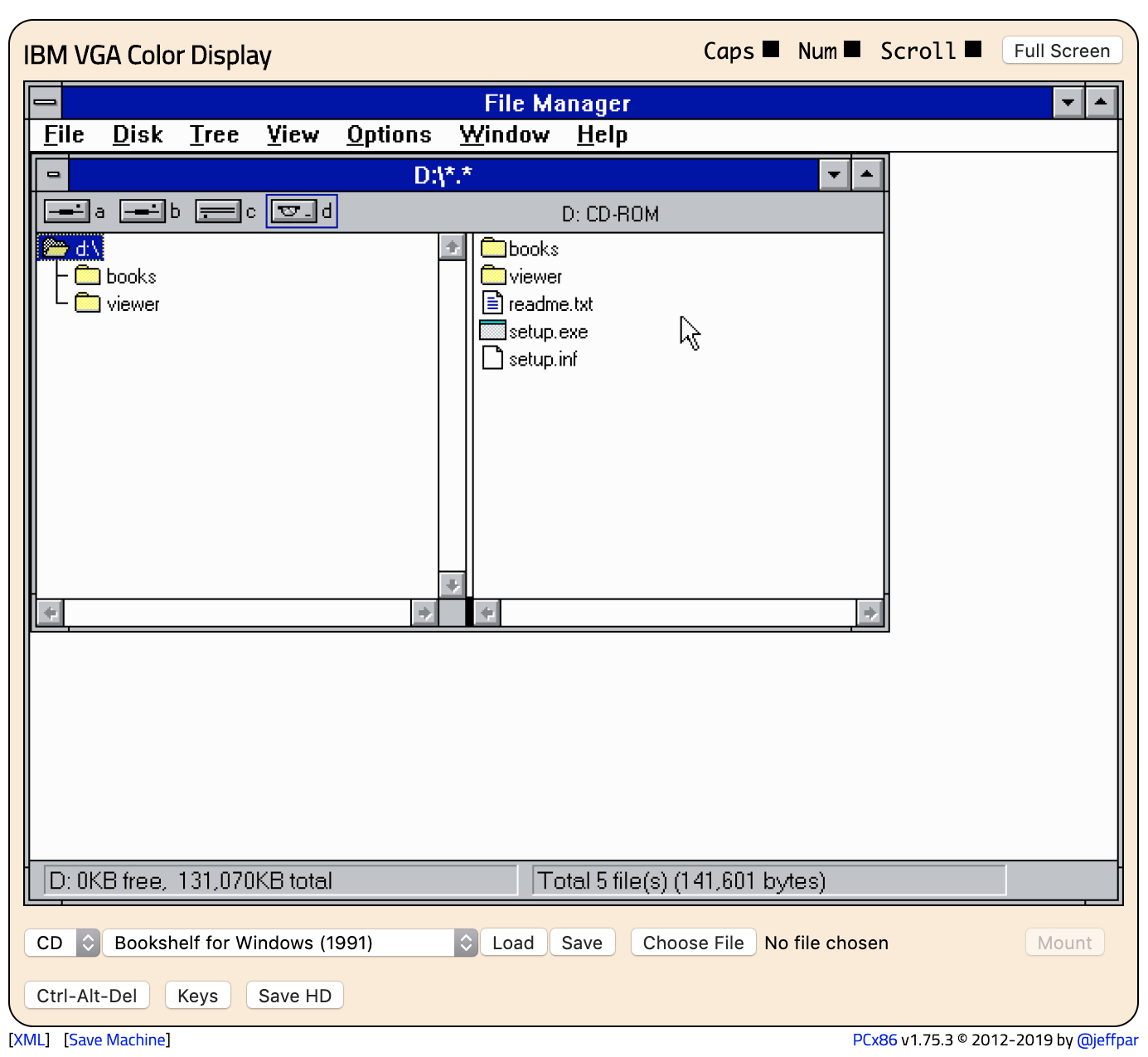 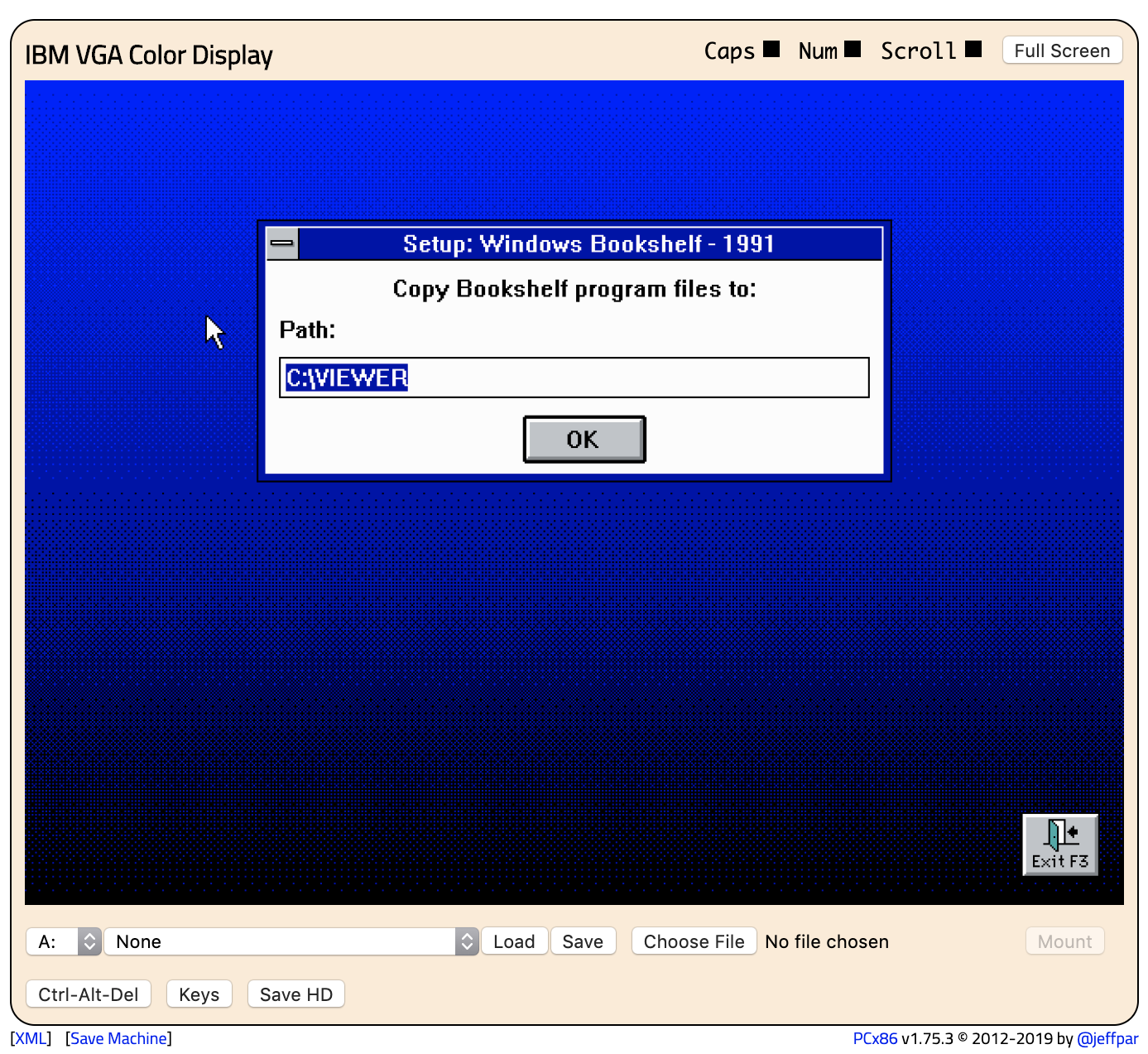 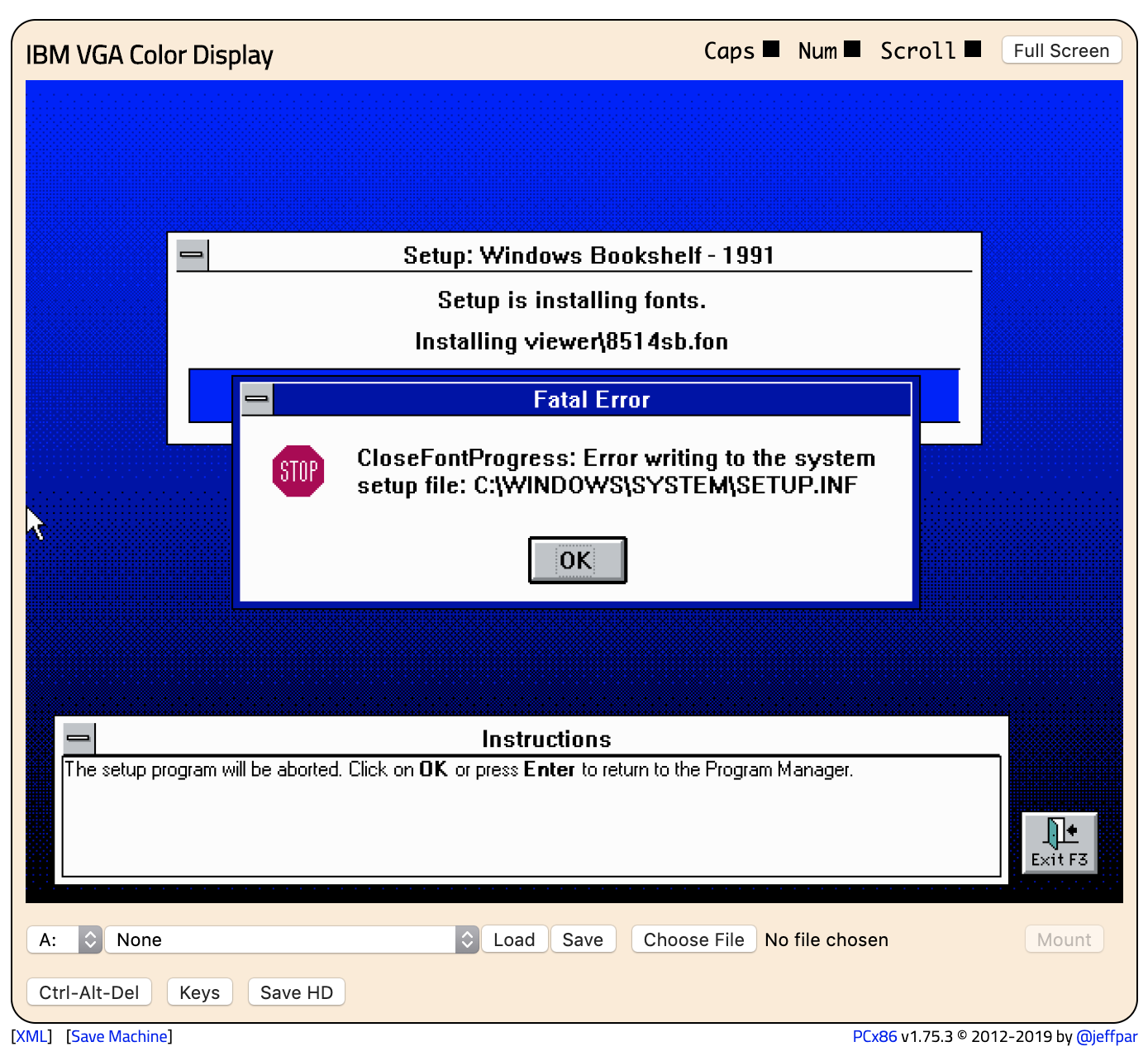 My first reaction to the “Fatal Error”: what just went wrong with my new CD-ROM emulation?

Even though this was a 27-year-old error message, I decided to Google It, and I got back exactly ONE hit… on my OWN website:

The good news: this was a known problem (and fortunately not my problem).

The bad news: as I lamented a couple years ago, Microsoft is still a crappy archivist. I suppose I should be happy that early KnowledgeBase articles are now the tiniest bit easier to find, thanks to an archive that I helped create, but I would still rather see Microsoft take some responsibility for this.

So, back to the story. The KB article provided three work-arounds, so I opted #2, which involved opening SETUP.INF in WRITE.EXE, searching for large comment blocks, and deleting them. After that, Bookshelf for Windows setup was successful. 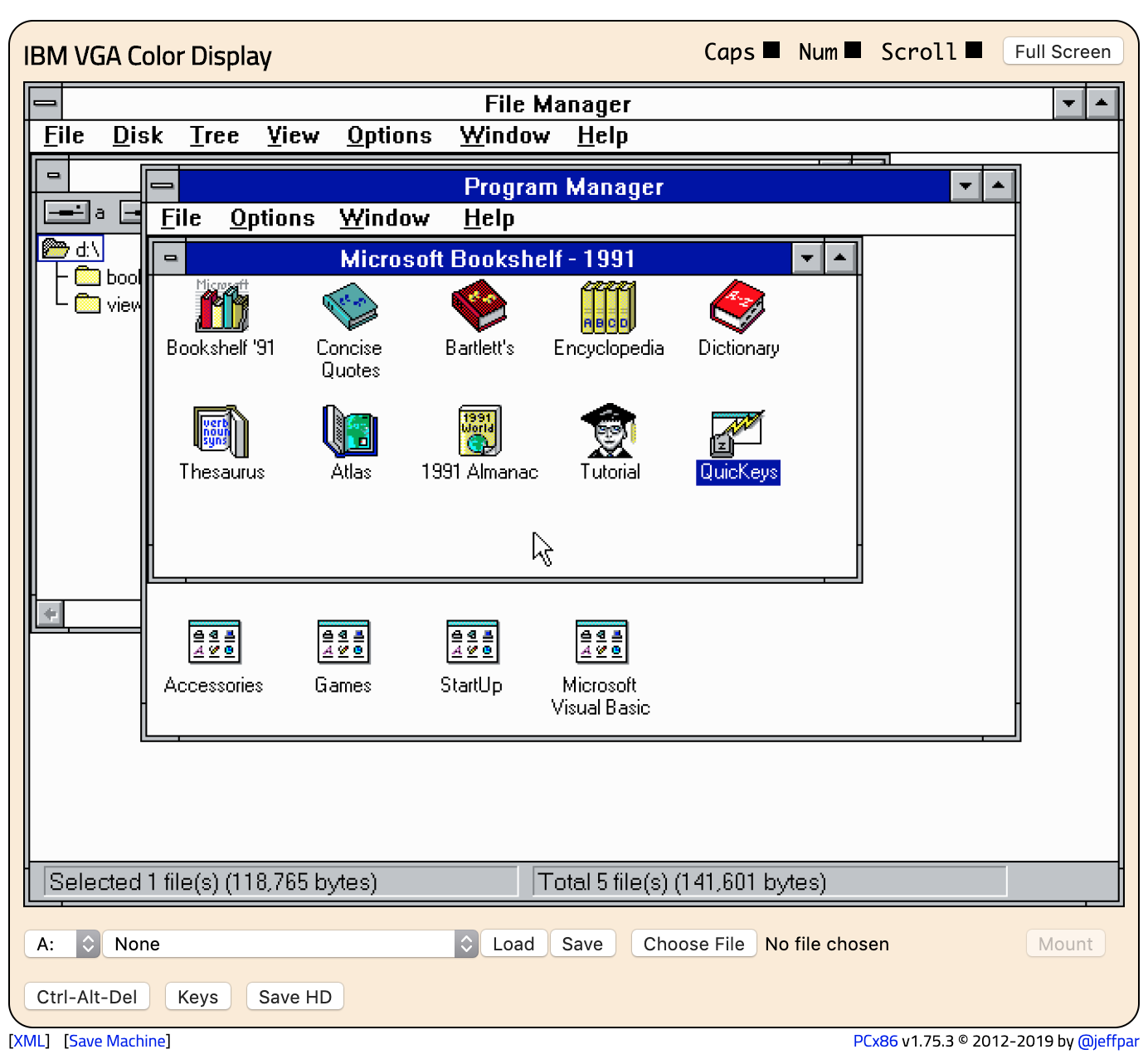 You can give it a try yourself in this IBM PC AT with ATAPI CD-ROM Support. I did not preinstall Bookshelf for Windows in that machine, because I wouldn’t want to deprive you of the authentic experience of installing buggy software from 1992 and choosing whichever “Fatal Error” work-around works best for you.

In other recent, coincidental, and entirely unrelated news, a friend was trying to create a preservation copy of a 20-year-old Microsoft CD-ROM entertainment title called Pandora’s Box. 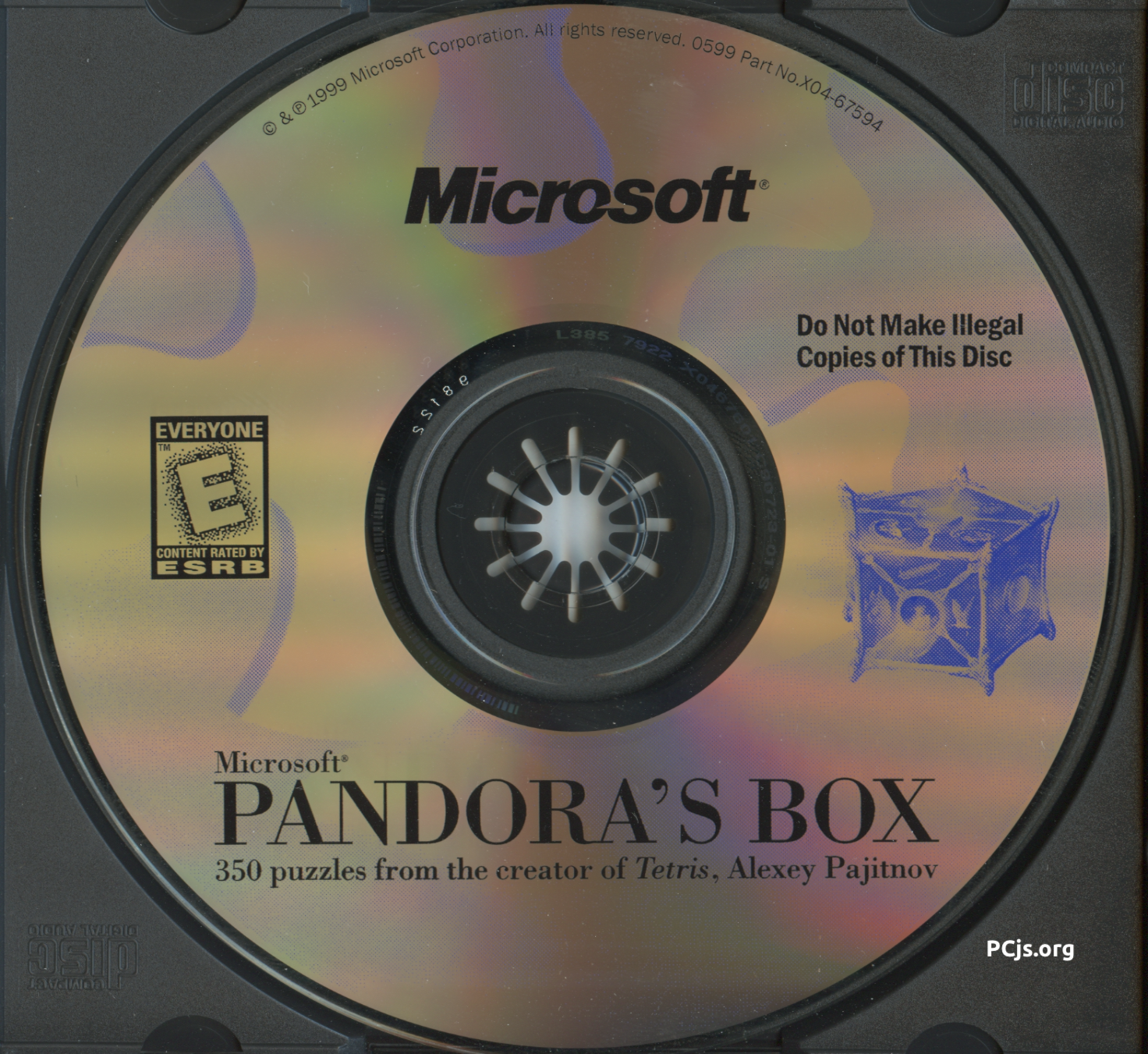 There were no problems cloning the CD-ROM, and the software would install fine from the clone, but when it was run, it would either crash or display “Please insert the correct CD-ROM….”, depending on the machine and operating system being used. 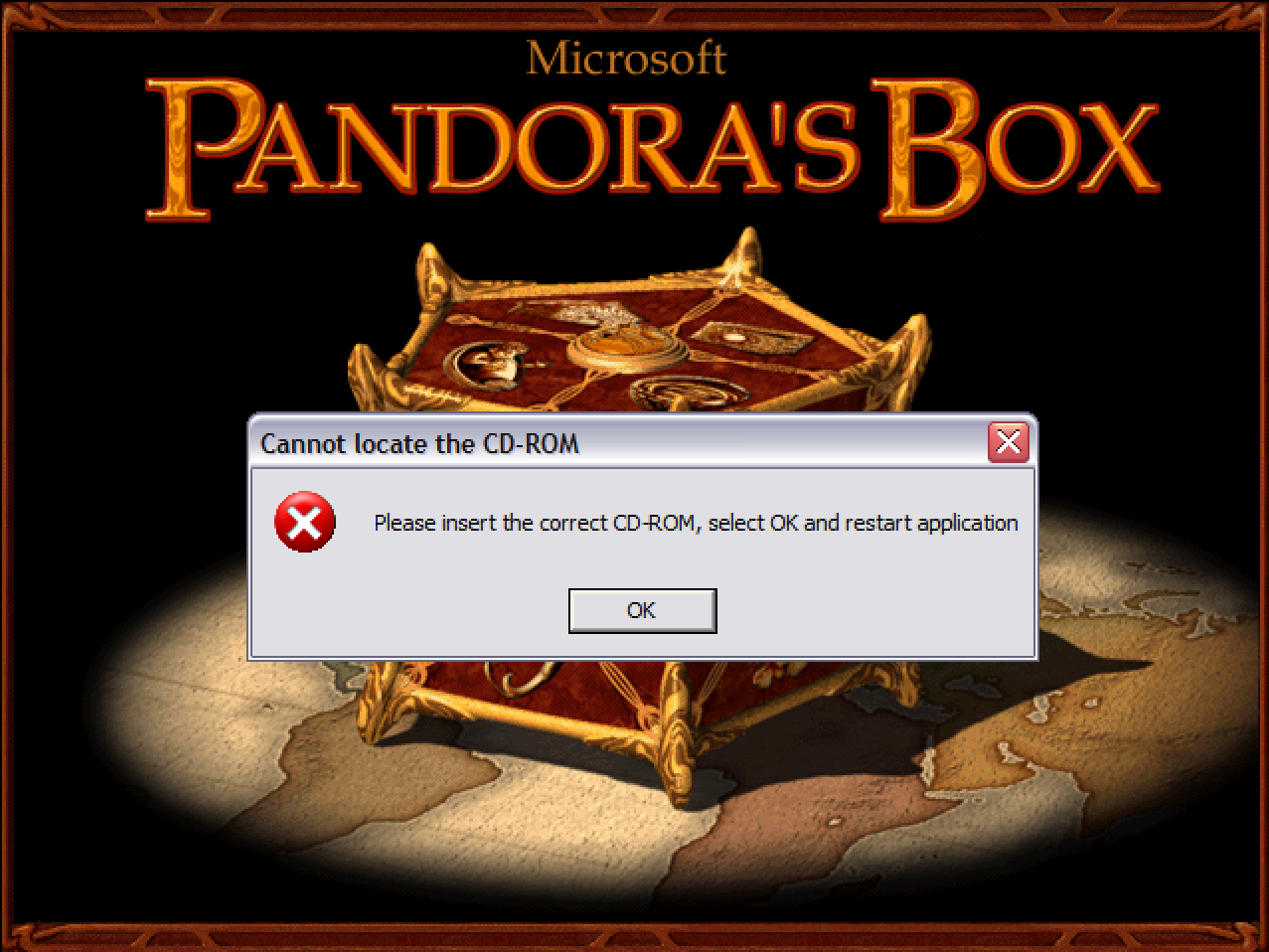 This led one to believe there was something wrong with the copy – and there was, because it turns out that Pandora’s Box was one of many software titles from the late 1990s that used a third-party copy-protection technology called “SafeDisc”. Suffice to say that if the game’s EXE file was accompanied by an ICD file, along with other files such as CLOKSPL.EXE, then it’s a safe bet the CD-ROM was protected by SafeDisc.

In the case of Pandora’s Box, however, the plot thickens. It’s possible that this copy-protection feature created problems for users with certain processors and/or operating systems, because in early 2000, less than one year after the software’s release, Microsoft issued a patch, along with the following notes on their website:

Important Note: This patch is used for English, French and Japanese versions of Pandora’s Box.

These self­-extracting, self­-installing files install 2 modified files, PANDORA.EXE and LANGENU.DLL. This patch fixes a bug specific to computers with new Pentium III processors, which produce the error “Unable to create DirectDraw surface. Make sure that DirectX is installed, and then try again” upon startup. If you do not have a computer with a Pentium III processor and do not recieve [sic] this error upon startup, then there is no need to patch your existing setup.

One important side-effect of the patch: the copy-protection was removed. Whether that’s because the copy-protection itself was responsible in some way for the bug, or because the copy-protection simply made a conventional patch too difficult to perform, is unclear. If the latter, then the makers of “SafeDisc” (or Microsoft) must not have thought through the implications of encrypting and renaming the main executable to PANDORA.ICD and calling the SafeDisc loader PANDORA.EXE. It appears that Microsoft’s “patch” simply replaced the SafeDisc loader with an updated and unencrypted PANDORA.EXE.

The Art of Software Preservation

Pandora’s Box illustrates more than just the obvious principle that “copy-protected software is hard to copy”, to which I’ve already alluded.

More than that, it shows that there’s more to preservation than simply figuring out how to “copy the bits”. There is also a history associated with each piece of software that needs to be researched, captured, and preserved as well. And that history may span a variety of obsolete media, including print media (magazine articles, advertisements, newsletters, etc) and online media (product pages and support articles that have been deleted, FTP servers that have been decommissioned, etc).

The worst-case scenario is software that requires a live server to authenticate users or provide some sort of virtual environment – a scenario that has tended to get more attention and hand-wringing lately, with the recent rise and fall of various Internet-enabled games.

In the case of Pandora’s Box, the CD insert said to visit http://www.microsoft.com/games/pandorasbox.

That’s a dead end now, but at least it’s a starting point. The problem I ran into with Bookshelf for Windows is that it predated websites, and even if websites had existed at the time, it’s unlikely that a “Bookshelf for Windows” web page would have mentioned any relevant KB articles. Companies don’t like mixing Product Support with Marketing, because that might make you think their software is less than perfect.

Thanks to the Internet Archive’s “Wayback Machine”, all hope is not lost when it comes to old websites, and it’s still possible to access the web pages for Pandora’s Box, including the Downloads page, where the previously mentioned patch is described.

Unfortunately, the patch is located on Microsoft’s decommissioned FTP server, which the Internet Archive apparently didn’t snapshot. But other people did, and some of them even uploaded their snapshots to the Internet Archive. So with a bit more work, it’s possible to eventually locate and download the patch for Pandora’s Box, eliminate the copy protection, and preserve another fine piece of software for many puzzle-loving generations to come.

NOTE: Pandora’s Box does not run in any PCjs machines at this time. The machine running Windows 95 is the best candidate, but PCjs ATAPI CD-ROM support isn’t quite up to the job yet.